The Story of Pokemon Go

When it comes to video game franchises, it doesn’t get any bigger than Pokémon.

It is the highest-grossing video franchise ever by a long way. There’s no arguing, it is the undisputed king of the video game franchises and dwarfs the likes of Call of Duty almost four times over.

To fully help you understand the magnitude of its greatness, take a look at this cool infographic from Titlemax below. It clearly shows the power of Pokémon and its ability to rake in the big bucks – $90 billion to be exact.

While the franchise makes the majority of its revenue from merchandising, this colorful cartoon sensation has still managed to come a long way from its humble beginnings.

The franchises concept started a Japanese game magazine in the 1980s. Its parent company Game Freak saw the decline in arcade gaming and teamed up with Nintendo and SEGA to develop a flurry of semi-popular games. Finally, in February 1996 the first Pokémon game was released for Gameboy, and the franchise was born.

Since then there have been over 122 Pokémon video games, gaming card, countless tv-series and even a movie starring Ryan Reynolds. Now, Pokémon Go is the latest money printing machine in the franchise.

An announcement in early 2016 that Niantic, a US-based development company, hand developed an augmented reality Pokémon game for Android and IOS sent Nintendo share price soaring. The global anticipation and a media sandstorm meant that on its release in June of the same year, the game became an instant global sensation.

For those of you who haven’t heard of Pokémon Go, the premise of the game is simple. It is an augmented reality game that relies on the user’s GPS to immerse you in the Pokémon world, where you are encouraged to move to different locations to catch Pokémon. Users then need to train and battle their animals against other users – a running theme in the Pokemon gaming and TV franchise.

Despite having a staggered release date and not being released in Japan until two weeks after, the app still set a Guinness World Record for the highest-grossing mobile game in its first month, making a whopping $207 million in revenue. According to Sensor Tower, Pokémon Go passed the 50 million download mark in just 19 days, breaking the previous record of 77 days by the game Color Switch.

While it felt like most of the world had fallen under the Pokémon Go spell, a few countries certainly felt the need to catch ’em all more than others. The US, Japan and Germany were the biggest players, with 28.5 million of the initial 45 million downloads coming from within the USA alone.

The app was so popular in the USA it easily eclipsed  Facebook, Twitter, Snapchat and Tinder in daily usage when it was first released. 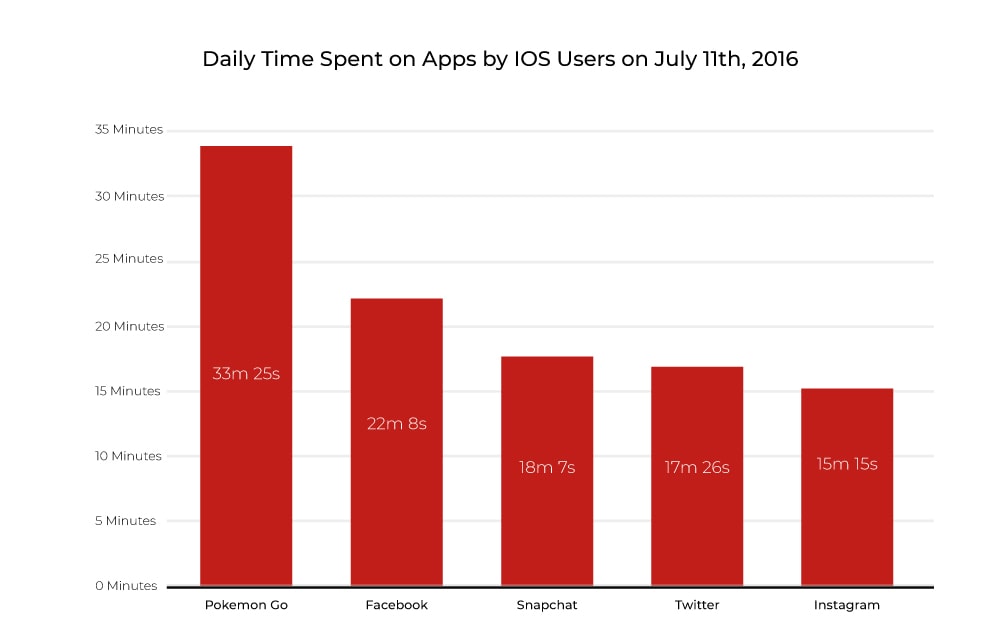 Very few can argue with the success of Pokémon Go. It will go down in history as one of the most successful mobile games of all time. And while the games instant popularity led to a flurry of record-breaking numbers, the release of Super Mario Run just a few months later dethroned the app for the most downloads in a single week.

Just like every viral trend, global hype goes just as quickly as it comes.  While the game never made the same record-breaking revenue as it did in its first few months, it did consistently turn over roughly $4 million every day as of April 2019. It was also the 7th highest earning game in March 2020. Not bad for a game that’s almost 4 years old.

Recently, a crossover with Pokémon Journeys: The Series is one tactic that the Pokémon Company has used to maintain a loyal user base and continue to keep their mobile game relevant. The crossover will see players discover monsters that have been caught by Ash and Goh in the series.

If one thing is certain, it’s that this isn’t the end of the cash cow that is the Pokémon franchise.

While there is continued talk of remastered versions of the classic console games hitting the shelves, it’s likely we will see a few surprise releases on Pokémon Day to celebrate the 25th anniversary of Pokémon: Red and Blue.